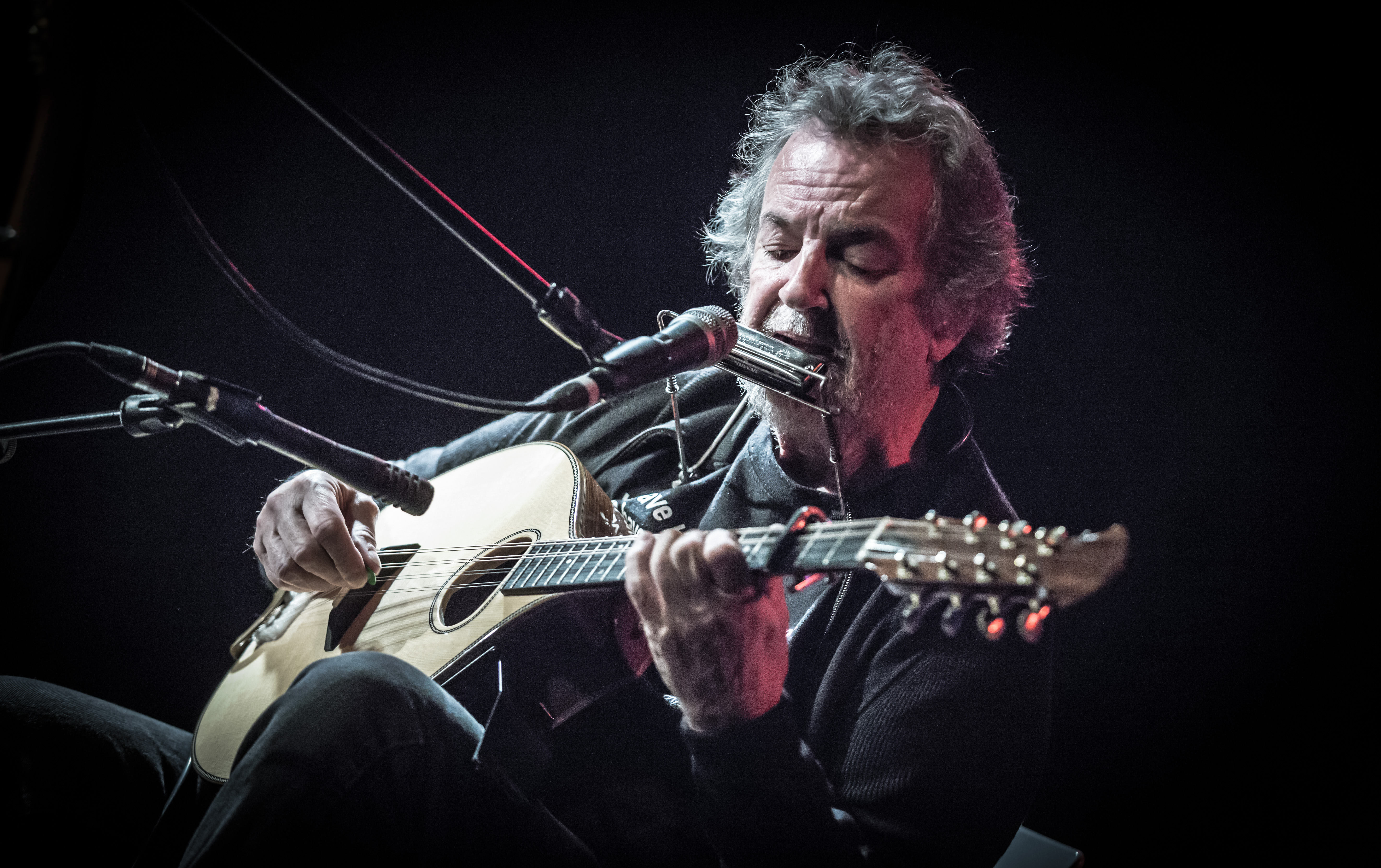 Andy Irvine is one of the great Irish singers, his voice one of a handful of truly great ones that gets to the very soul of Ireland. He has been hailed as “a tradition in himself.” Musician, singer and songwriter, Andy has maintained his highly individual performing skills throughout his over 50-year career. From Sweeney’s Men in the mid 60s, to the enormous success of Planxty in the 70s, his duo with Paul Brady in the later 70s and then from Patrick Street to Mozaik, LAPD and Usher’s Island, Andy has been a world music pioneer and an icon for traditional music and musicians.

As a soloist, Andy fills the role of the archetypal troubadour with a show and a travelling lifestyle that reflect his lifelong influence, Woody Guthrie. To quote The Irish Times, “Often copied, never equalled”, his repertoire consists of Irish traditional songs, dexterous Balkan dances and a compelling canon of his own self-penned songs.

Andy Irvine first made his mark with the seminal band Sweeney’s Men in 1966 but after two years he left and travelled ‘way out yonder’ by ‘the sunburnt thumb’ to Bulgaria, Romania and Yugoslavia, earning his living as a street musician and absorbing the musical traditions of the Balkans.

Returning to Ireland in 1970, Andy united with Christy Moore, Dónal Lunny and Liam O’Flynn to form Planxty, fanning the flames of Irish traditional music well into the next and future generations. Planxty broke up – for the first time – in late 1975 and Andy performed and recorded with Paul Brady, making the classic album Andy Irvine & Paul Brady in 1976. He also worked and recorded brieefly with De Dannan before re-uniting with Planxty in 1979 until it’s second break up in 1983.

In 1985 Andy formed Mosaic, a pan-European band that included Dónal Lunny and Hungarian singer Marta Sebestyen. The band lasted for one blissful summer and Andy returned to solo work.

Andy was touring the US regularly with guitar player Gerry O’Beirne at this time and in 1986, at the instigation of fiddler Kevin Burke (Bothy Band), Patrick Street was born with the addition of Jackie Daly (De Dannan) and guitar maestro, Arty McGlynn.

Patrick Street has since recorded eight studio albums and one live with differing personnel. They released their last album in November 2007, On the Fly, being the first with fiddle, banjo player, John Carty and the last with retiring member, Jackie Daly.

Andy recorded his second solo album Rude Awakening in 1991 and then created the hugely influential East Wind which featured Davy Spillane on uillean pipes and was produced by Bill Whelan who went on to write Riverdance.

Andy recorded his third solo album Rain on the Roof in 1995 – this one really is (nearly) solo. It includes his anthemic song Never Tire of the Road and then his fourth, Way Out Yonder in 2000 which closes with the haunting song The Highwayman.

They have since released two albums, Live from the Powerhouse (2003) and Changing Trains (2007) and have toured Australia, Europe, USA and Japan with great musical success. This band, like Patrick Street is currently in mothballs but look out for it’s new album recorded in Budapest in 2014 and about to see the light of day as The Long and the Short of it.

2004 saw, after a break of 21 years, the return of the great group Planxty, The band played a small gig in Lisdoonvarna, largely to family and close friends – it was not advertised as Planxty – and then opened at Glór in Ennis to a fantastic reception. Planxty went on to play 10 sold out nights in Vicar Street in Dublin and record a live CD and DVD.

The following year 2005, they played 6 sold out gigs at The Point Depot in Dublin, as well as shows in Galway, Belfast and The Barbican in London. It was generally reckoned that the band was better than ever and those who experienced it will never forget it.

Though Planxty was no more, it’s memory lived on with the band LAPD which featured Andy, Donal and Liam plus Paddy Glackin, the great Dublin fiddle player. LAPD had to throw in their hand when Liam decided to call it a day in 2012 but Donal, Andy and Paddy added John Doyle and his driving guitar and Mike McGoldrick’s brilliant flute, whistle and uilleann pipes to form a new band, Usher’s Island. Debut album – Usher’s Island – out in June 2017.

Andy reached the age of 70 in 2012 and two great concerts were held in Vicar Street, Dublin to mark the occasion. Sweeney’s Men were reformed (with Johnny Moynihan and Terry Woods, Mozaik got together, LAPD was there and Andy & Paul did a set. Andy’s great friends from Athens, the Galiatsos Brothers came over and the shows were recorded and later came out on DVD and CD as Andy Irvine 70th Birthday Concert at Vicar St 2012, music produced by Dónal Lunny and filmed by Philip King.

In August 2016 Andy went to Melbourne to record a new album with Luke Plumb – a brilliant mandolin player and record producer – they later toured Australia together in 2016/2017 with the album which is called Precious Heroes. It awaits its release here in the rest of the world and should be out after the Summer of 2017.

The year 2017 also coincided with the 40th Anniversary of Andy Irvine & Paul Brady. (It was recorded in August 1976 but not released till January 1977). Andy & Paul, together with Dónal Lunny, who produced the album and played guitar and bouzouki on it and Kevin Burke who had played fiddle on the album, performed eight sold out concerts. Cork, three in Vicar Street, Dublin, Derry, Galway, Limerick and Belfast to rapturous audiences. The welcoming applause as they took the stage lasted for about five minutes on each occasion!

Ever the man for new pastures, in the last decade, Andy has played concerts in Moscow, Mexico City, Newfoundland, Costa Rica, Panama and Nicaragua as well as undertaking extensive tours of Japan, Iceland, Faroe Islands, Argentina and Chile.

Although an integral part of the finest Irish bands of our time, Andy Irvine continues along the path he set for himself so long ago – a vibrant career as a solo artist in the old style, a teller of tales and maker of music.